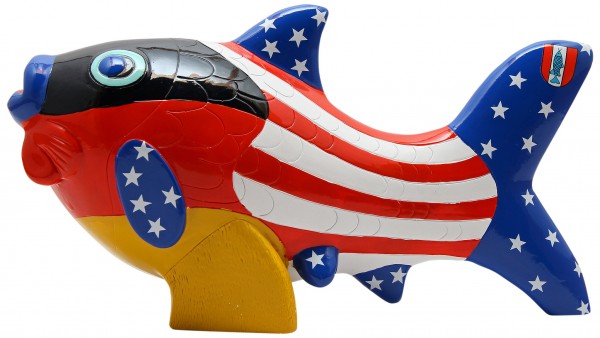 Description Evaluations 0
Description
The K-Town Fish, the symbol of the German-American friendship here in the KMC* for more than 60... more
Close menu
Product information "German-American Fish"

The K-Town Fish, the symbol of the German-American friendship here in the KMC* for more than 60 years!

Many people are asking "Why carries the city coat of arms a fish? Do you have a lot of fish in Kaiserslautern?"
The answer: No fish! But there is an old legend:

That was back in 1497 when at Heidelberg the Elector Philipp had a fish served that was about 20 feet long and 385 lbs in weight. This big one had been caught in the Emperor’s lake at Kaiserslautem. Around his neck the fish had a ring with the following inscription: “I am the first among all the other fish that has been put in the lake personally by the Emperor Frederick II, on 5 October 1230”.

Now this fish came back to the mind of the City-Fathers when, after the Thirty Years’ War, they had instead of the former two small fish put only one but so much mightier in their seal. However, you know all about City-Fathers and historians. In the following centuries they kept on arguing about the real shape oftheir heraldic animal. Well, the fish got used to it and was by turns carp or pike until it had such a look that it even fits into our time to be an honor to its city.

Today the fish is made of polyresin (polystone), is handpainted with the German and the American flag and comes with a base. It is a very unique souvenir from Kaiserslautern or how our friends would say "K-town".